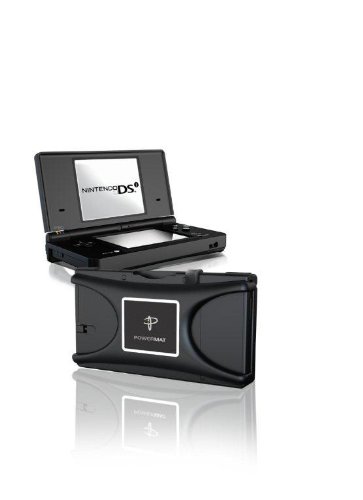 Definitely among the simplest ‘hacks’ I’ve ever done, but I figured since I had a need to do it, someone else might be thinking about doing the same. Yes, I could’ve tried to do this without the sleeve, but risking the wrath of the one who usually plays it by breaking something, when they’re already used to the sleeve, seemed a bit foolish. Tempting, since it would’ve been soooo much cleaner…maybe another time…

I recently switched from Powermat induction chargers to Qi charges, mostly because all my devices use Qi now (Galaxys, Nokias) but I had to keep one last charger for a Nintendo DSi with a Powermat receiver.

After having had to search on EBay for Qi pads for my Galaxy, I remembered seeing pads with MicroUSB heads. Since the Powermat is really just a sleeve with an adapter that plugs into the charging port, and the Powermat set comes with a MiniUSB to DSi adapter, I assumed the charger was 5V and these pads output 5V, so it wouldn’t even need to step up/down. Since they all take almost a month to come in from China, I figured I’d play it safe and order one of those, in case the pads with just contacts needed some additional induction circuitry the phones already have. The one I chose is called “Universal QI Wireless Charging Charger Receiver Tag Coil with Micro USB Head” and I got it for $11.98, shipped, from seller “trendworld2012”. While they have options for the placement and direction of the head, I ultimately found this to be irrelevant for my purpose.

After about a month, and almost forgetting about it, the pad arrived, so I got to work. I had also found a similar case for a 3DS that I had incorrectly ordered and never returned so I started with that one. Disassembly of the Powermat receiver proved extremely easy. Using a razor blade around the edge to remove the bottom Powermat plastic square peeled it off in seconds (although I went too fast on the good one and the plastic cracked), and the same with the rubber and plastic covers on the inside. Unfortunately, I didn’t think to post any of this until it was all over, so I just tried to recreate the disassembly as best I could. The fourth pic shows the guts with plastic already Dremel’ed off but it was just a thin circle with some cutouts for IC’s to fit.

After peeling the charging connector back and pushing the circle circuit board through, I used a Dremel with a cutting disc to level the inside and cut slots in the curves to make the pad fit snuggly.

After desoldering the original charging plug from the Powermat circuit, I used a razor blade to slowly ‘peel’ the rubber off in layers to expose the metal conductors. It probably would’ve been easier to melt but I didn’t know what was under the rubber yet. The next photo shows the plug with about a third of the rubber cut off and the metal bent to fit the solder pads on the Qi receiver. The length of the metal was perfect, I just had to trim one lead. The Qi pad has 5V and ground pads on conveniently centered on all 4 sides, clearly labeled. It took a little bit of work to solder the metal to the pads, but applying a fair amount of pressure seemed to work and there didn’t seem to be much risk of overheating the Qi circuit, despite my concern.

After sticking the rubber back and snapping it back on the DSi, here’s what it looks like. Sloppy because I broke the plastic square, and the Qi pad sticks out the side a tiny bit, but it works!

Author: justing
Filed Under: Projects
Tags: hacks, Qi
I got tired of waiting for Google Glass…
Searching is in progress